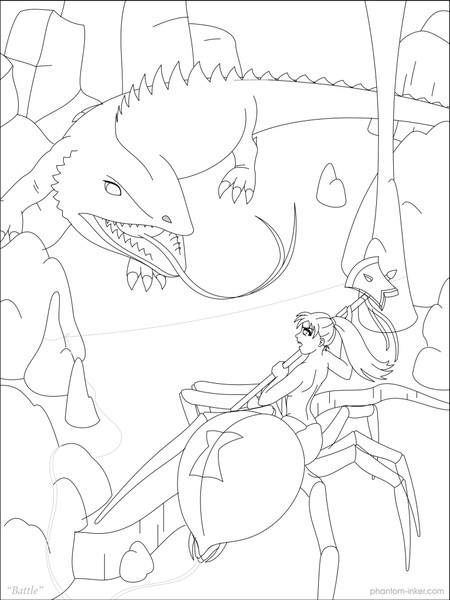 Isabella was once a human Princess, cursed by an evil witch to become a drider. She fled the castle, and hid in the wilderness, doing odd jobs to survive, while the King and Queen searched in hopes of one day finding their lost Princess; they believe a cruel evil drider kidnapped her, but little do they know that she became the monster they seek.

Among the odd jobs she took was to protect a village at the request of the village Elder from a terrible Salamander, which had killed many of the villagers in recent months. Armed with naught but her trusty battle-axe and her own thread, Isabella entered its cave, and she will not leave until either she or it is dead.

A suggestion from ~SSGuy, for his drider character Isabella. I bent it a bit from his original request, but I like how it turned out. This was his original description, which was vivid enough to inspire my imagination to create the picture and story above:

One of the characters that I have created in my wild imagination is a drider huntress named Isabella. She has a thin face with ruby red lipstick and long black hair. (Her upper body skin is white but she isn't fully pale. Her ears are long and elf like with a silver ring piercing at the top left side of her ear. Her eyes are a brown hazel color that is main focus on her emotions. She has a thin human like body style with a black ink tattoo on her right arm that resembles an "S" with two dots between the curves of the S.

She has a ruby outlined in gold for a necklace that she wears. Her torso is black with red stringing that holds it together. She isn't busty having a size between C and B. Her belly button is shown though as the tight torso is cut off right at her belly button.

Her spider body is pure black with a HUGE red hour glass across the large abdomen. (she is a black widow and yes she has a BIG abdomen.) The weapon she carries is a staff which looks to be carved by her own with a sharp jagged stone tied to the top of it. Hanging from the end of it is a few small beads that she has been given to by a few village children. (Being the only drider in her human filled village gives her a lot of attention. She is really good with children as well)

What I picture her doing is being in a tree filled forest running from a large predator. Im picturing the predator being a large chameleon like lizard flashing his slimy long tongue (dripping and soaked with a sticky coating) at her so close to catching his arachnid prey. Its head is about the same size as her body. His body would be a brownish green color with a tail full of orange tipped spikes across its tail.

A bit of webbing is trailing from the end of her abdomen as she laid a zip line to rush across. She is well past the gap of the two branches as it is the predators last resort to use his long tongue to catch Isabella as his meal. She is a bit nervous but isn't showing all her fear. She is hoping to make it out alive but the picture I am imagining could go both ways. It leaves the ending open as if one ending could be that she escapes from the large forest dwelling lizard and the other is that the tongue smacks onto her abdomen and the drider is reeled into the predators large maw.

Aside from her hands, the lineart here is finished. Again, this is entirely CorelDRAW and a mouse, for about 15 hours. The "Salamander" (which SSGuy suggested as a "chameleon") looks more like a large, somewhat fat lizard, but whatever. It's a nasty monster, and it needs to be vanquished by a princess who still very much wants to protect her people, even as she must stay hidden and secret to avoid their fear of her.

I'm not marking this picture as "Mature" like I did with the other work-in-progress. She may be naked, but there's simply nothing to see from this angle.

Anyway, let me know what you think of her! :)