Candace and the Medallion 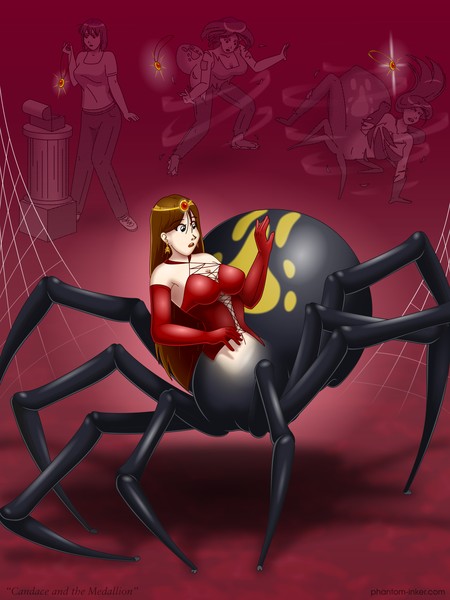 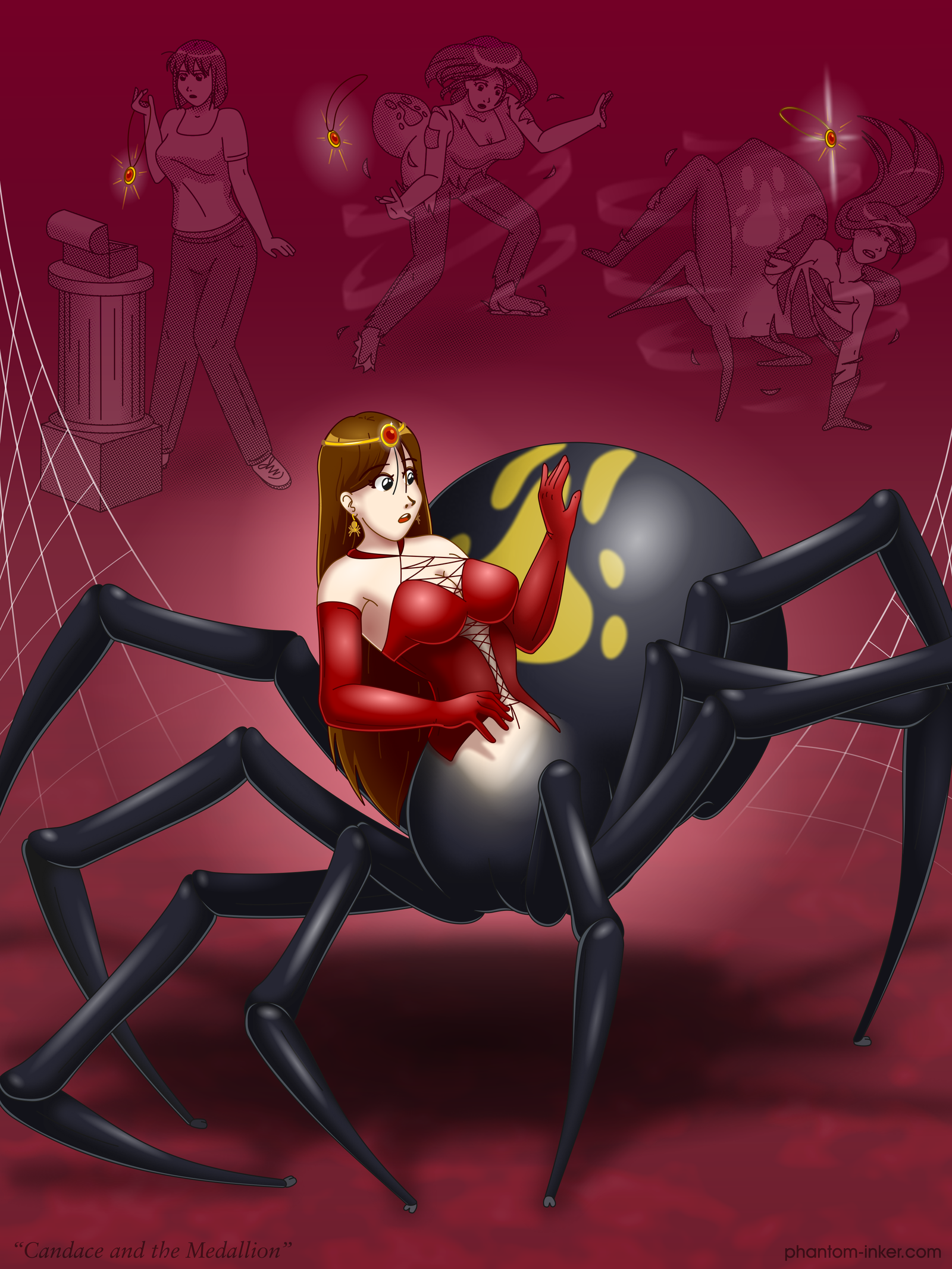 Holy crap, I went a bit overboard on this.

So I've been wanting to do a transformation sequence sort of what like ~justinblong used to do for a long time now. (Sadly, his deviantART account's now deactivated, so you'll have to use Google to find his art.) â€”Aaaaand I ended up making something that's not really like his stuff was; I like the faded-comic effect of the sequence panels, and the colors and style of the big panel are more the way I draw than he does, and so it's really not quite like anything.

This was also inspired by the color red. Lots of red. Muse wanted a drider girl, wearing red, against a red background, and we negotiated on the red a little, but Candace's outfit nails it. And then Muse wanted her story told, and nearly 900 words later, here we are...

Centuries ago, there was once a girl orphaned by an invading army. EkÃºshria wandered her ruined village, and she swore vengeance.

Finding that magic came easily to her, in the Black Mountains she built a keep, and a tower; and in the depths she discovered forbidden magics, dark magics; and she traded everything she had, even her body, for powers to wreak destruction upon all who marched in service of a king.

The feared Witch Queen of the Spiders was born in those caverns, and when at last her army of monsters flooded upon the green lands, few dared stand in her way.

That which fighting could not do mortal danger could, and the three kingdoms that had warred since before their tales were writ in the scrolls of history united against a common threat. For the Witch Queen was wrath, was vengeance, and her monsters spared none but women and children.

The united armies of the kingdoms fought back, and many men died. But the kingdoms prevailed, and over many years, the battle came at last to the foot of the Witch Queen's tower. The knights battled the undead spiders that guarded its steps, and on its summit, fought the Witch Queen herself. The last remaining knight struck the fatal blow, and drove his sword through his foe's blackened heart.

But she laughed as she died, and as her body fell, her essence, her power and magic and desires burst forth, and were sealed for a thousand years inside a golden medallion of her divising. The medallion fell, rolled, and disappeared over the edge of the great tower into the rubble. The Witch Queen was defeated, and her powers were lost to antiquity.

At the far end of this bazaar there was a little old man at a stand, selling knicknacks and treasures. Most of them were the usual garbage, but beside his stand there was a stone pedestal, and on it, there was a small wooden box. The box was ornately decorated, and had a small keyhole.

"What is this?" said Candace, her hand hovering over it. It was surprisingly warm.

"A treasure of the ancients," said the old man enigmatically.

Candace looked at him wryly. "What's inside?"

The old man's eyes darkened. "It is a secret. Buy it, and open it, and you shall know."

"So you can't open it," said Candace.

The old man glared at her. "Thirty krusj, and it's yours."

"Young Miss, it is surely worth so much more. An ancient treasure! Twenty."

"The box alone is worth eight! Twelve."

"It would be worth eight if you could open it," she said. "Which you can't. And I'll bet you took it to a locksmith."

Candace grinned, and handed him a few coins from her purse. She went to pick up the box, but as her hand touched the box, it sprang open.

Candace held up her hand. "Bought fair and square," she said.

She reached inside, and pulled out a small necklace. There was a golden circular pendant on its end, with an inset red gemstone. Strange letters circled the medallion, and it was glowing.

"It's just a pendant," said Candace, pointing at it.

Her finger touched it.

The medallion had slept for a thousand years, changed hands between men so many times, but at last, it had found a woman to whom it could bequeath its power. Brilliant energies burst from the medallion, at last unleashed, and swirled about Candace as the sealed magics found and joined their new Mistress. Wrenching, twisting, and bending, her form grew and changed until Candace had become that which the long-dead witch most desired: The Witch Queen of the Spiders, female wrath incarnate, reborn to wreak havoc once again.

Candace looked down at herself, confused. "I'm a â€” spider?" she said.

The answer flooded her mind. She remembered things she had never seen, the keep, the tower, the witch, and the war.

Candace took the golden crown off her head, and stared at the medallion embedded within it. "I have only one thing to say to you. Hell no. I'm not declaring war on anybody or destroying or ruling anything. I might be a spider witch now, but I'm nobody's queen. You should've waited for a girl who wants to see the world burn, but instead you got a girl who likes to collect stuff."

She stared at the round body that trailed out behind her, and at the long, shiny black legs that glimmered in the sunlight, and at the sleek, soft crimson gloves on her hands. "But I will give you one thing, EkÃºshria: You had a heck of a look, and I kind of like it."

Anyway, this is CorelDRAW, and a mouse, and some tweaking with Corel Photo-Paint, so I put it in mixed-media even though 98% of it really is vector art.