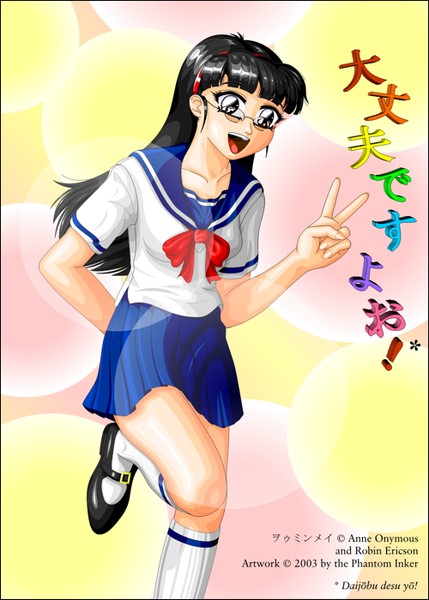 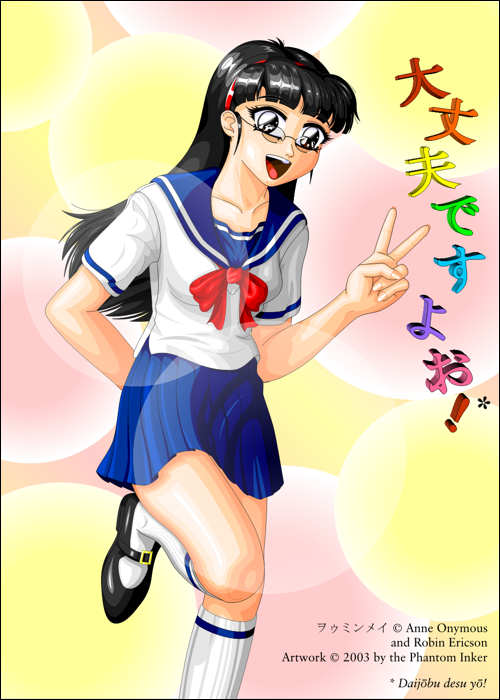 This is Mingmei Wu, the Japanese girl with the Chinese name, also from the Wotch. Ming was magically created by accident, and she's supposed to be the epitome of stereotypical Japanese dorkiness. Hence the goofy sailor-schoolgirl uniform, the overly-happy pose, the victory fingers, and hair that is shiny enough to be seen from space.

Ming was fun to draw, in that I got to spend a lot of time staring at weird photos of Japanese schoolgirl uniforms (Note: Never, EVER type in "japanese schoolgirl uniform" into Google's image search --- you'll regret it) and studying how these very strange things are put together. This picture has some of the best clothing I've done so far, with the notable exception of Katie's shirt.

So I do kinda like this picture, but it still makes me feel dirty to look at it (I'm tempted to check the "mature content" button on this ^^;). Nobody --- no sane living human being --- should ever act like she's acting here. If it weren't for the magic, I'd claim it was impossible to act like that.

Oh... for those who don't speak Japanese, the text reads "Daijoubu desu yoo," which doesn't really translate very well into English. It's approximately equivalent to "everything's great," only moreso.