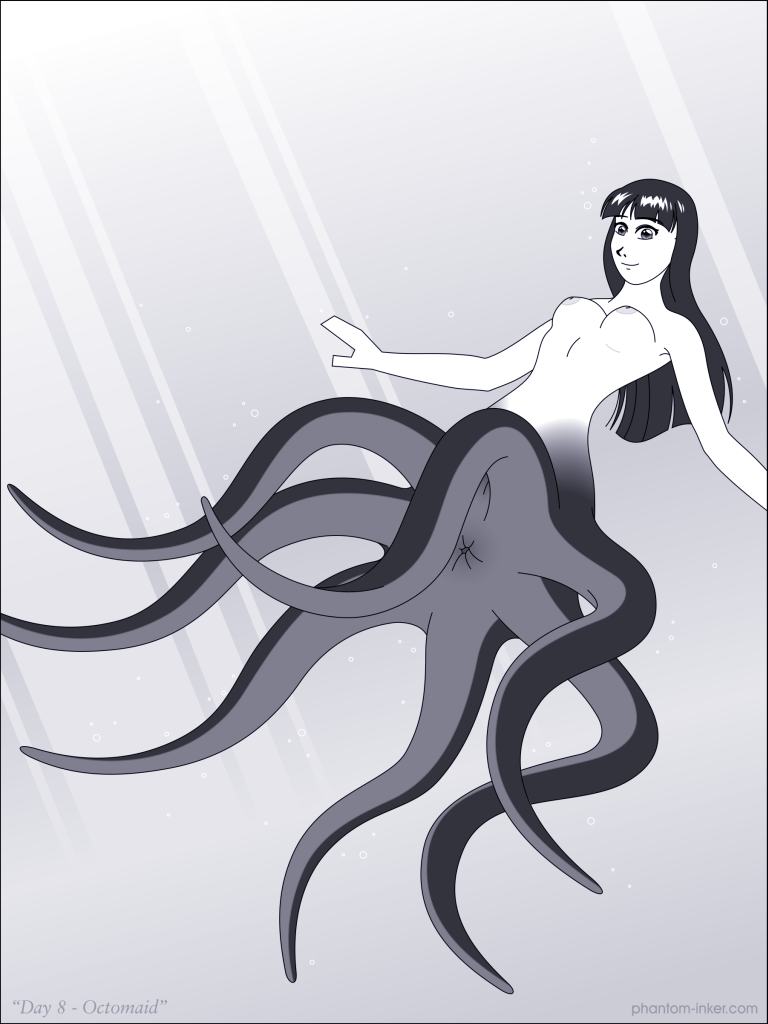 So I went a little overboard on this one. I liked the pose, and the end result is that I ended up doing some basic solid-color fills, and dreamed up a fairly intricate backstory for her.

Kyoko is a 20-year old college girl with long black hair and green eyes. Kyoko is also a victim of a bizarre family curse: Sheâ€™s half octopus or squid, with seven long, dark-grey-blue legs. She generally wears long dresses or skirts that cover her legs completely so that she can relax and stay in her â€œrealâ€ form as often as possible. Kyoko has a younger brother who knows her secret.

She lived her whole life in San Francisco, and lives there to this day. Her family is Japanese; sheâ€™s second generation, with her grandparents coming over to the States just after World War II.

On her 16th birthday, Kyoko was walking down the street to school, and suddenly her legs felt weak, and she fell over. When she looked down, her legs were gone, replaced by seven long, writhing octopus-like legs. It took her nearly the entire day to gain enough control of them to stumble home, where she learned that itâ€™s a bizarre family curse that theyâ€™ve endured for dozens of generations: The women turn into half-octopus monsters on their 16th birthdays and stay that way the rest of their lives, but it usually skips two or three generations or just barely touches one. Her mother, for example, has a single octopus-tentacle-like â€œtailâ€ that sheâ€™s carefully hidden most of her life. Her great-grandmother was completely changed just like Kyoko. Family lore says this has been going on for five hundred years, when a hill demon first cast the curse on a girl who refused to have sex with him.

Kyoko learned to control her new legs over the next few weeks, and learned to disguise them as well: With enough concentration, she can will herself to be human again for up to eight hours. With that ability, she was able to return to school, and eventually go off to college. There have been a few close calls, but sheâ€™s never been discovered.

The problem, of course, with being half an aquatic creature is that you dry out. Kyoko has to spend an hour or two a day wet or her legs start to get stiff. At home, this meant she took a lot of baths and would sometimes soak in a small pool in their small fenced-in backyard. But now sheâ€™s at college, and there are no baths: Only showers. So she often waits at the pool center until late at night when everyone has left, and then spends an hour or two swimming. On weekends sheâ€™ll often go down to the beach and go â€œswimmingâ€ all day, exploring the ocean floor around the Bay.

So... yeah. I'm pretty sure this is Kyoko swimming around somewhere in San Francisco Bay in the summertime.