The Fairy and the Carriage 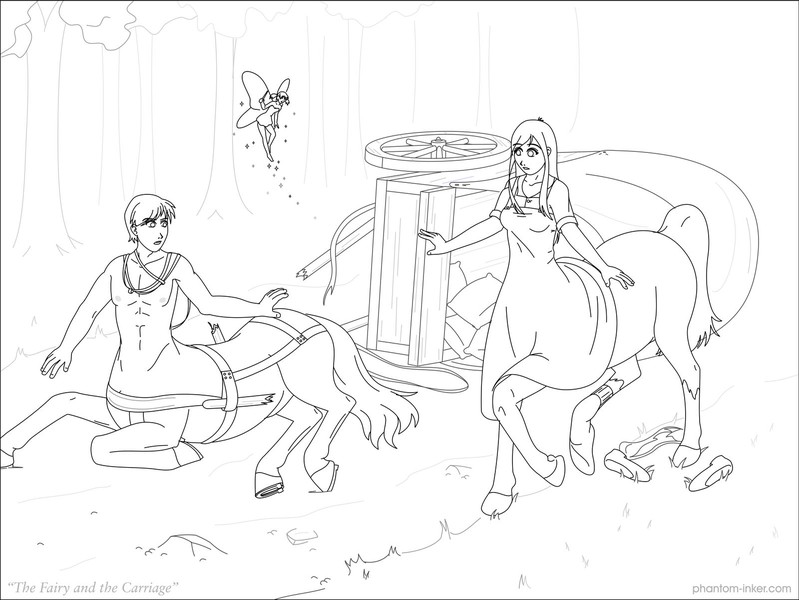 Kate was driving her covered wagon home one day from the market. A fairy flew up beside her, and they got to talking to pass the time. The farm girl had owned her horse Lightning for some years. She always felt she treated him well â€” she truly felt he was her best friend â€” but she was never really sure. The fairy suggested they find out by casting a spell to allow the horse to talk, taking just a little speech from the human girl to do it. But the spell didn't quite work right, and both the farm girl and the horse got a bit more mixed together than expected.

But at least now she could ask him, even if it was a bit more directly than she was expecting.

The fairy offered to change them back right away â€” it was the fairy's mistake, after all. But Lightning was curious about this strange new form, and he asked the fairy if he could stay like this for a while. The fairy was nervous about it, but she said that he could, if Kate were to stay that way for a while too: The fairy had to either change them both back or neither.

Kate thought about it and agreed â€” as long as it was for just a little while.

But the fairy had some bad news. He was cute, and he took care of her, and he was her best friend â€” and one night she just couldn't resist. The fairy couldn't change them back â€” at least not right away: It wouldn't be good for the baby.

So... I dunno. Ten or twelve hours doodling in CorelDRAW with a mouse? Something like that. Have a fun picture with a sweet happy story.