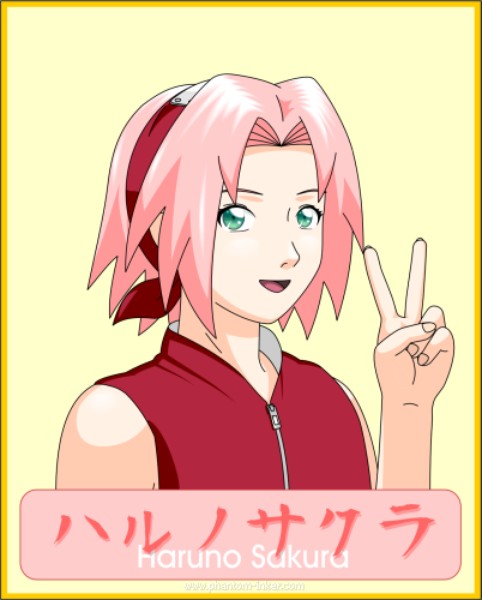 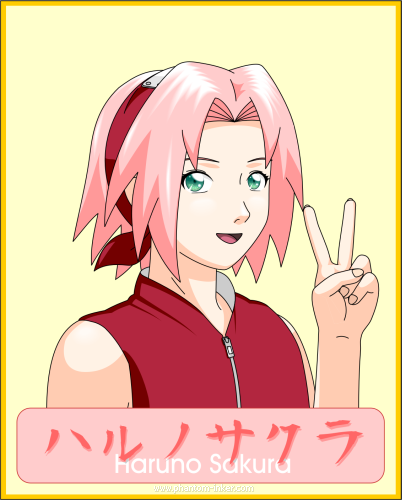 Okay, so the deal is that my fiancÃ©e and I are raving rabid fans of Naruto (and I don't mean the Nah-rooooo-toe thing that they air on Cartoon Network; I mean the real Naruto, your choice of either the original manga or anime, subtitled and not dubbed). Funny how so far I've only done fanart of a series that I don't really like all that much; so here's a character from a series I do like!

This, of course, is the inimitable Haruno Sakura (Sakura-chan to her friends), being all cute and growed-up as we see her in the story today. I drew part of this while waiting for yesterday's episode to arrive, and finished the rest of it today. My fiancÃ©e would like to point out that she helped, in that she sat beside me and poked at me until I made the eyes the exact precise shade of pale blue-green that Sakura actually has (okay, well, she bugged me about the size of her face and stuff too, but we spent like hours on the eyes, and now she thinks "it's about as good as it can get." I'm not quite sure exactly what she means by that >.> ).

I debated calling this "A Natural Pink" --- y'know, like some girls are "a natural blond" or "a natural brunette" --- but I didn't think anybody would get the joke. Oh, well. shrug.

This would make a nice trading card, I think ^_^

In total, this was maybe like five-ish hours of work, I think, and it's 100% vector art except for the barely-visible signature at the bottom.

(And no, I'm not gonna do every single character from the entire series; there aren't that many days in a millennium, although my fiancÃ©e may convince me to do Hyuuga Hinata, her favorite character.)