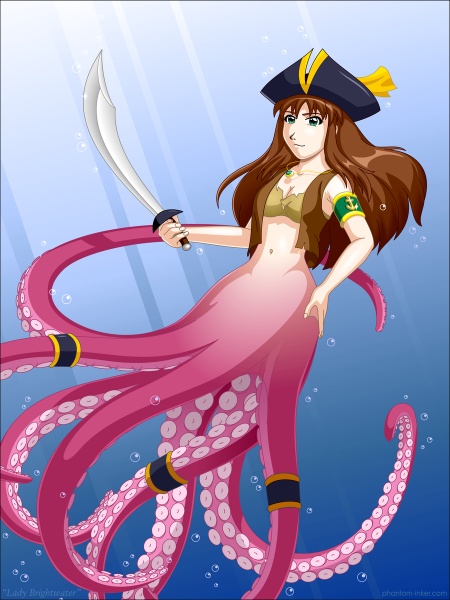 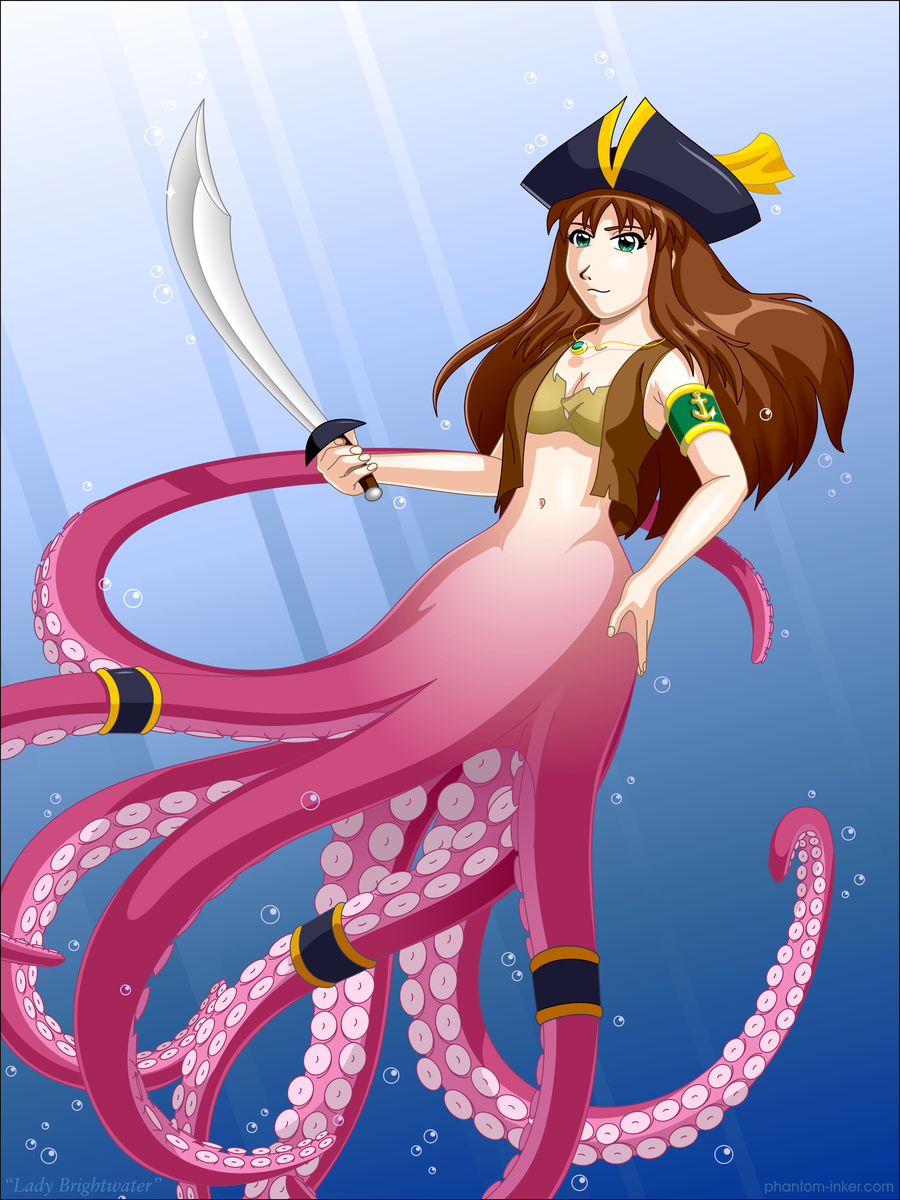 This is how *thedarkstrider described her to me:

Backstory: "Taryn Brightwater was a pirate captain, whose cunning and beauty captured many a heart as she stole their treasure. She was not evil, and her pirate activties were fueled by her adventurous desires, and took only gold and loot from her victims rather then their lives. However, on a quest for the ultimate treasure her ship was lost to a violent storm, and Taryn was thrown overboard.

"However, she did not die, but was instead brought before Neptune himself. Neptune could see the zest for life and adventurous spirit burning in her eyes, and offered her a deal. If Taryn would agree to help him police the oceans from evil marauding pirates, he would spare her life and give her the power to continue her quest. Taryn agreed, and Neptune transformed her into a mermaid/cecaelia.

"Taryn now travels the oceans, sinking the pirate vessels that would prey upon others, and all the while searching for sunken treasure and continuing her pirate adventures underwater. Once in a while, she transforms other like-minded sailors and pirates into mermaids, building up her underwater crew."

Character: "From the waist up Taryn resembles a beautiful woman, but from the waist down she has the body of a fish/octopus. She still dresses as a pirate, her captain's hat on her head and her clothing, a tattered motley of vests, shirts and other scraps stolen from ships or scavenged from sunken vessels. In right hand, she wields a rusty cutlass. Her left hand was lost in a battle long ago, and she wears an enchanted bracer tipped with a trident/blade shaped like an anchor. Given to her by Neptune this is the source of her powers. As a pirate, Taryn was most formidable, as a mermaid/cecaelia she is much more, using her mermaid powers/cecaelia tentacles to subdue and sink her prey."

This was about 30 hours with CorelDRAW and a mouse, 100% vector art this time.

*thedarkstrider chose her overall look and colors (long brown hair, purple legs, pirate hat, etc.), and I filled in the rest of the details. Those of you who have been watching over LiveStream have enjoyed seeing this grow to fruition.

This is the first time I've attempted a real, paid commission. I was a little nervous accepting money for my work, but it seems to have worked out nicely; *thedarkstrider seems pleased with the result, and I'm reasonably happy with it as well. I may do more commissions in the future, but since they take about a month in real time, and since there are other projects I want to work on too, I don't expect to do more than a handful per year at most.

And big thanks to *thedarkstrider for coming up with a really neat character!