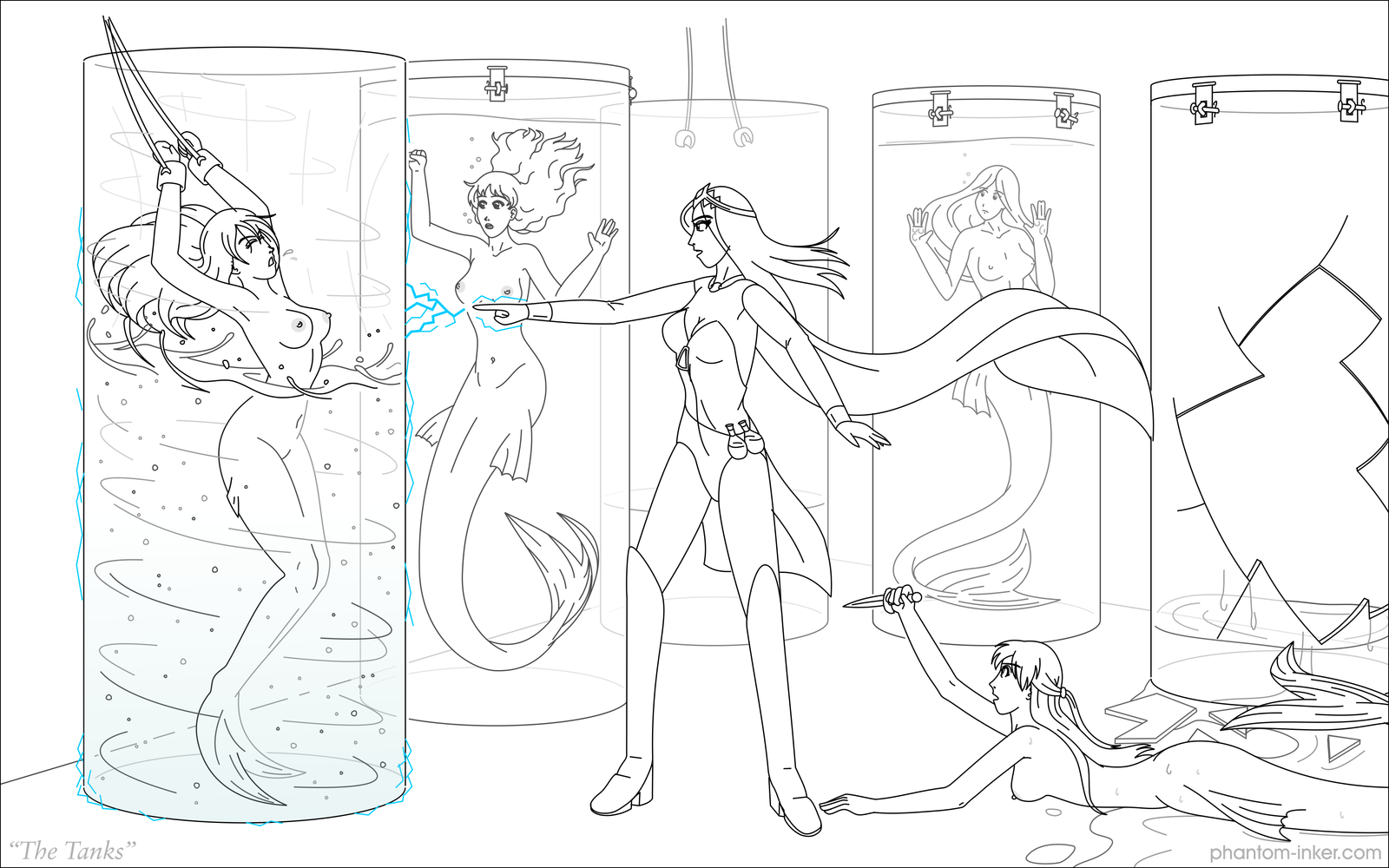 Vanessa had had enough.

She had been kidnapped, poked, prodded, turned into a freak of nature, and locked into a tiny tube with barely enough room to move. She had endured countless abuses at the hands of the Sorceress, scales pried off one by one, skin oils sucked away, tiny bits of her tailfin snipped off â€” all to make the Sorceress's potions. Mermaids were rare, of course, and they didn't like being captured: So why bother to capture a mermaid for her essence when an aspiring Sorceress can simply kidnap unsuspecting local girls and transform them? Chaotic Evil has its advantages.

But Vanessa was not the sort of girl to take abuse. Not from anyone. Not even with her body mutated and her days spent tortured. She was smart, and she was patient, and she would win. She waited. She bided her time. She endured. And when the moment was right, she struck.

She felt sorry for the new girl â€” what was her name? Adia? â€” but she would be the last. The Sorceress's abuse would not ruin anyone else after her. There would be four of them, four sisters bound by their unfortunate fates â€” but there would be no more.

So when the Sorceress was distracted, wreaking her unnatural havoc on the poor new girl, the chamber filled with the crackle of electric magic, Vanessa thrust, kicked, kicked, and kicked again with her strong tail, and after a crack, the glass gave way. Out she poured, onto the floor, her hands sweeping one of the knives off the nearby table as she fell. She whirled, pivoting on her tail, and landed behind the Sorceress. Only a few inches to go, only a few inches away! Even if it cost Vanessa her own life, a knife to the Achilles tendon, then a knife to the femoral artery, then a knife to the heart â€” and the nightmarish Sorceress would be no more!

I started this in 2014, and trebor22031982 suggested I finish it for #MerMay, which was a pretty darn good suggestion indeed: Four mermaids with one picture! So a bit of sketching later, some hands, some fixes to lines and proportions, and a little storytelling, and here it is.

It's interesting to compare how my art was then with how it is now. It's surprising how much has changed in how I draw, how I solve all the little problems that come up while rendering a picture. I can't remember the last time I used pure-black in a drawing, but here it is. I spent quite some time fixing proportions to make them less wonky, and while it's not perfect, it's at least acceptable.

For what it's worth, the characters, left to right, are:

Muse gave them all future storylines, too!

My Muse got on a storytelling kick, so there you go.

So, like, does this count as four mermaids for #MerMay, or only one? >_>