To Defy the Gods 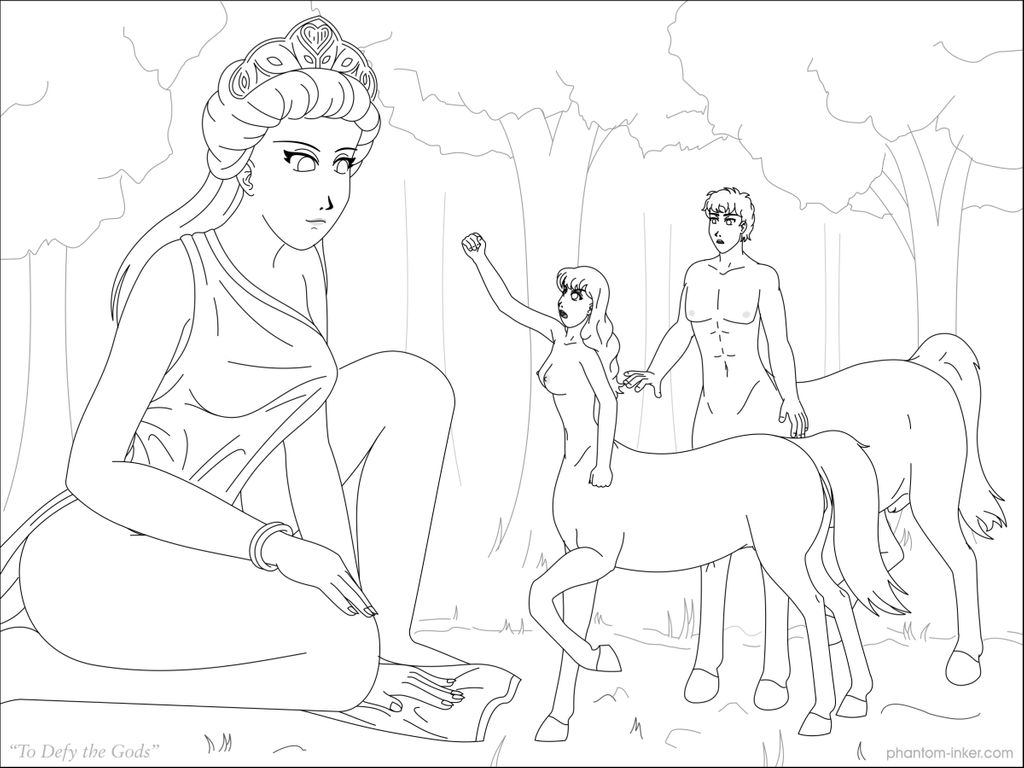 "Come with me," she said, her hands balling up into fists.

"Hera!" cried Callista. She stared up at the goddess and shook her fist. "Hera!"

The goddess peered down at the little mortal. "Well, hello," she said. "I never thought I'd see you again."

"And how is my little centaur girl creation?" said Hera, kneeling closer.

"I am fine," said Callista.

"Ah, well, that's excellent then," said Hera, and made to stand up again.

"Listen to me!" shouted Callista.

"You know that I didn't know it was Zeus," said Callista.

"Of course not," said Hera. "He was in disguise. It wasn't your fault. He'll sleep with any pretty girl he takes a fancy to, the lout. But I still had to punish you, you know. Have to keep up appearances. It's nothing personal."

"Well, I just want you to know that I am fine!" cried Callista, shaking her fist at the goddess. "I â€” I have had a good life this last year! And I can â€” I'll be fine like this! I am punished but I will not suffer by it! I â€” I want you to know that I defy you to make me miserable!" Tears welled up in her eyes. "I have found another man and made a good life for myself!" She grabbed Xaron's hand.

The girl had spunk. "It's not wise to defy the gods," said Hera.

"I defy the suffering you would have me endure!" said Callista. "Not the gods. Merely their capriciousness. Turn me into a gnat and I would still make for myself a good life!"

Callista's hand trembled a moment. "What do you mean?"

"Why make a good life for yourself? Any other girl would have thrown herself off a cliff had I turned her into half a horse just for having sex with a man she'd fallen in love with."

"My life, my future, and my destiny are my own. Your will made me to be nothing more than a sex toy for the centaurs, but I will turn that about and I will fight and I will become their conscience and their wife, even if I cannot ever be anything more!"

Hera nodded. "That's a very strong claim, child. What if I were to offer to change you back?"

Callista's hearts skipped a beat. "No! My future is my own to decide. You made me this, and now I claim this nightmare as mine, mine to bend to my will, and I will not give it back!"

Hera nodded. "That is an impressive answer, child. And it is good that I am in a good mood. So I will ask you: Bow before me, just once, show respect to the gods who created you: For that small token, for that small token alone, I will forgive you your impudence, and I will grant you my blessings."

"If you truly wish to claim your role among the centaurs, you can be their mother," said Hera. "For I am the goddess of motherhood. You need not be barren. I was perhaps hasty to cast that curse upon you when first I made you."

Callista looked over at Xaron. "I â€” would bear his children," she said, "if I could. And I would raise them to be gentlemen and ladies, not monsters. And I would make every last of the centaurs to be a civilized man if it takes me the rest of my life."

"Then respect me, and it is granted," said Hera.

Callista bit her tongue. She had so often debated whether she would fire an arrow at Hera if she were to see her again, and here stood the goddess. She could throw a rock, even if she had no arrows. She could yell defiance once more. But what was offered â€” it was the future she had wished ever since meeting Xaron.

She knelt down on one knee and bowed forward. "My lady," she said.

Hera smiled. "Be blessed," she said. She reached out with a finger and touched Callista on the forehead. "Be the wife and mother the centaurs need. Bring Zeus's beast men to heed. You and your daughters and your daughters' daughters have my blessing, now and forever more, so long as you bow to me."

Callista turned to Xaron and took his hand. "Come," she said.

"Where are we going?" he said.

"If my daughters and my daughters' daughters are to have Hera's blessing, they must exist first," she said, and flicked her tail at him. "I'll continue teaching you to be civilized after we're done."

Hera stood up and watched the little mortals trot off into the forest. The centaurs had been a scourge ever since Zeus had created them, but perhaps this girl and her daughters really did have the power to make men out of beasts. Only time would tell.

So I have this running story in my head that the reason you don't see female centaurs in Greek mythology until the very last stories is because they weren't created at the same time the male centaurs were, and that they were created to make the wild unruly males more civilized.

This picture is a bit of that. It was inspired by this delightful picture by ~moondragonwings, which is probably my most favorite centaur photomorph ever. When I saw it, I imagined her yelling at Zeus, "Do you not see!? I am happy despite what you have done to me!" That kinda morphed into Hera instead of Zeus, and eventually into this drawing. I drew this fairly quickly; it's not more than ten hours, which is pretty fast for the amount of detail in here. As usual, it's all done with CorelDRAW and a mouse.

Or at least that's how my retelling goes.