Centaur Anatomy 102: Parts of the Body 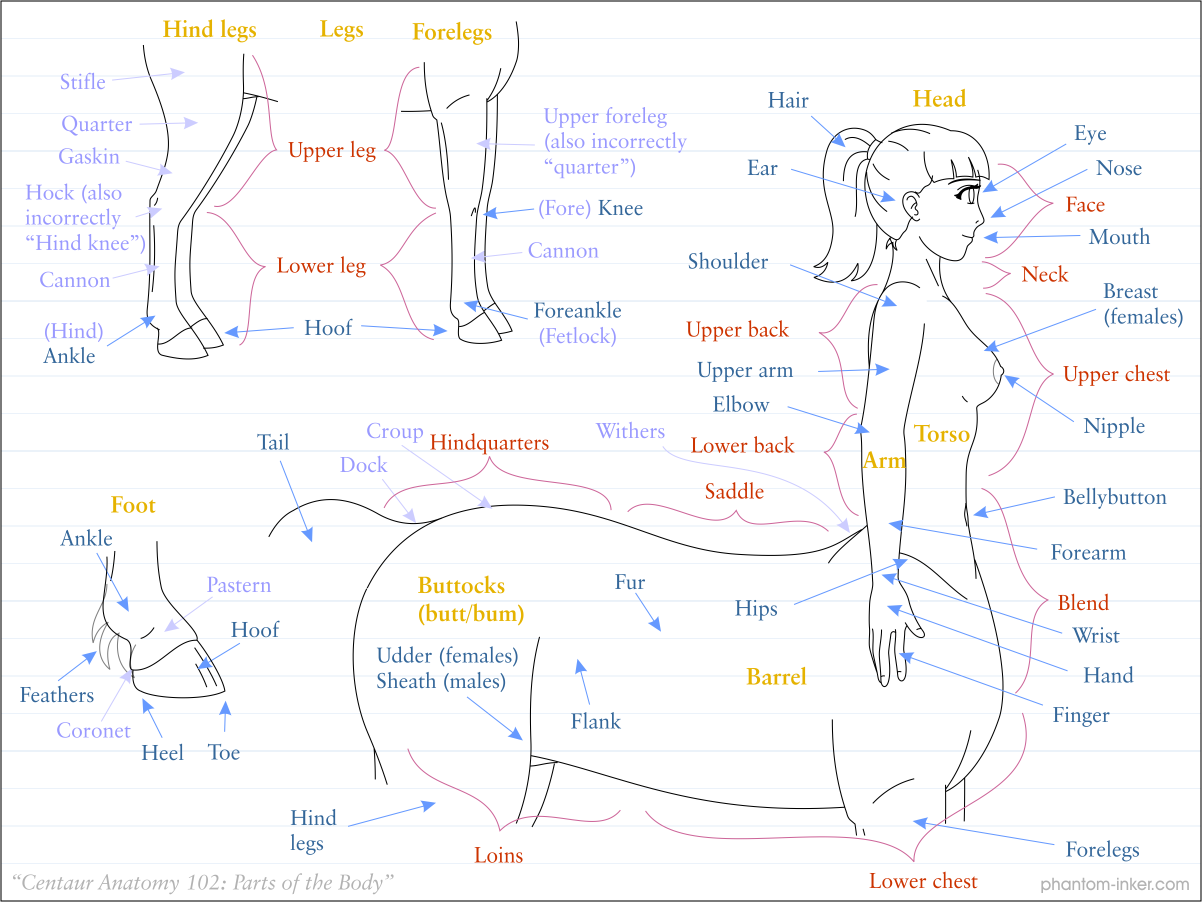 Usual disclaimer: These are my opinions! There is no real physical centaur to compare against, so the best I can do is make an educated guess. If you prefer a design other than this, that's fine, but this is what I'm going to keep drawing. If you disagree, fine, but do so politely, and above all, please don't ask I draw things your way. I know how I think it'd work, and that ain't gonna change.

So before we can talk about, say, the cardiovascular system, we have to talk about basic terminology for the parts of the body. These are the ones I use, derived from a mixture of human terms and horse terms, and a few new ones:

These are mostly as you'd expect. Head, arms, chest, there's not really that much to talk about.

Adult females do have breasts and nipples; but males occasionally will not have nipples. (This is true in some other species, so it's not a huge stretch that vestigial nipples would disappear.)

I read an article many years ago arguing various terms for this region of the body, and the word "blend" was the one I liked best, and I've used it ever since. The blend includes what is colloquially called the "belly" or "stomach," as well as the part of the equine body above the start of the equine ribcage.

There is a bellybutton, which is mostly vestigial in my designs, since the stomach is much farther down the body.

The "hips" are not true hips as on a human; rather, they are hints of the uppermost equine shoulder bones, combined with a transition between muscles, and merely look a bit like hips. They move a little with the forelegs during walking or running.

The blend can be classified as "smooth" or "sharp" depending on how the fur grows there; if there is a long transition from bare skin to furred body, it is "smooth," and if there is an abrupt transition at the hips, it is "sharp."

The saddle is named for the object which would sit there on a horse, and allows the word "back" to be used to refer to the humanoid part. Suffice it to say that whether you can actually put a saddle there depends on the centaur you're talking to.

The withers refers to the rounded lump at the base of the lower back, formed by muscle and fat and the ends of the equine shoulder blades. It may look a little like a hint of the top of a pair of human buttocks, but otherwise has nothing in common.

Most of the remaining terms are fairly normal equine terminology except for the use of the word "fur." Horses have hair on their hides, as do centaurs; but to allow the word "hair" to refer to the long strands growing from the head or tail, the short hair on the barrel and legs I prefer to call "fur."

To avoid confusion, arm-like names such as "forearm" are restricted to the humanoid arms. Thus the forelegs especially get a bunch of replacement names.

As there is no reasonable substitute that I can come up with, "shoulder" is used both to refer to the humanoid shoulder and to the equine shoulder.

My centaurs will occasionally use a colloquial term when talking about their legs. "Quarter" is occasionally used instead of "Upper foreleg" (a "quarter" is the joint in the hind leg equivalent to a human knee). "Knee" may become "foreknee" or "hind knee" depending on which legs they're talking about. "Cannon" may be used for the lower foreleg (on a horse, it is usually only for the lower hind leg), and "foreankle" is frequently substituted for "fetlock," the correct term, and "hind ankle" may be used to describe what is correctly just the "ankle." Last, but not least, "hind knee" may be used instead of hock, which is actually quite wrong since it has far more in common with a human ankle than with a knee, but it is likely used for parity with the similarly-positioned joint in the forelegs.

The bolder blue words here show words that my centaurs would preferably use, right or wrong. The lighter blue words may appear, but are less preferred or considered archaic.

Comparison to a horse and human:

In general, the words match up pretty well. "Blend" is new, and "loins" is a little different, and the forelegs need slightly altered names to distinguish them from the arms, but as a whole, if Lucy here said that she'd gotten a splinter in one of her coronets, a horse rancher would know exactly what she was talking about.

So that's basic terminology of the centaur body. Next up, we'll talk about, uh, I dunno, maybe the skeleton or something.