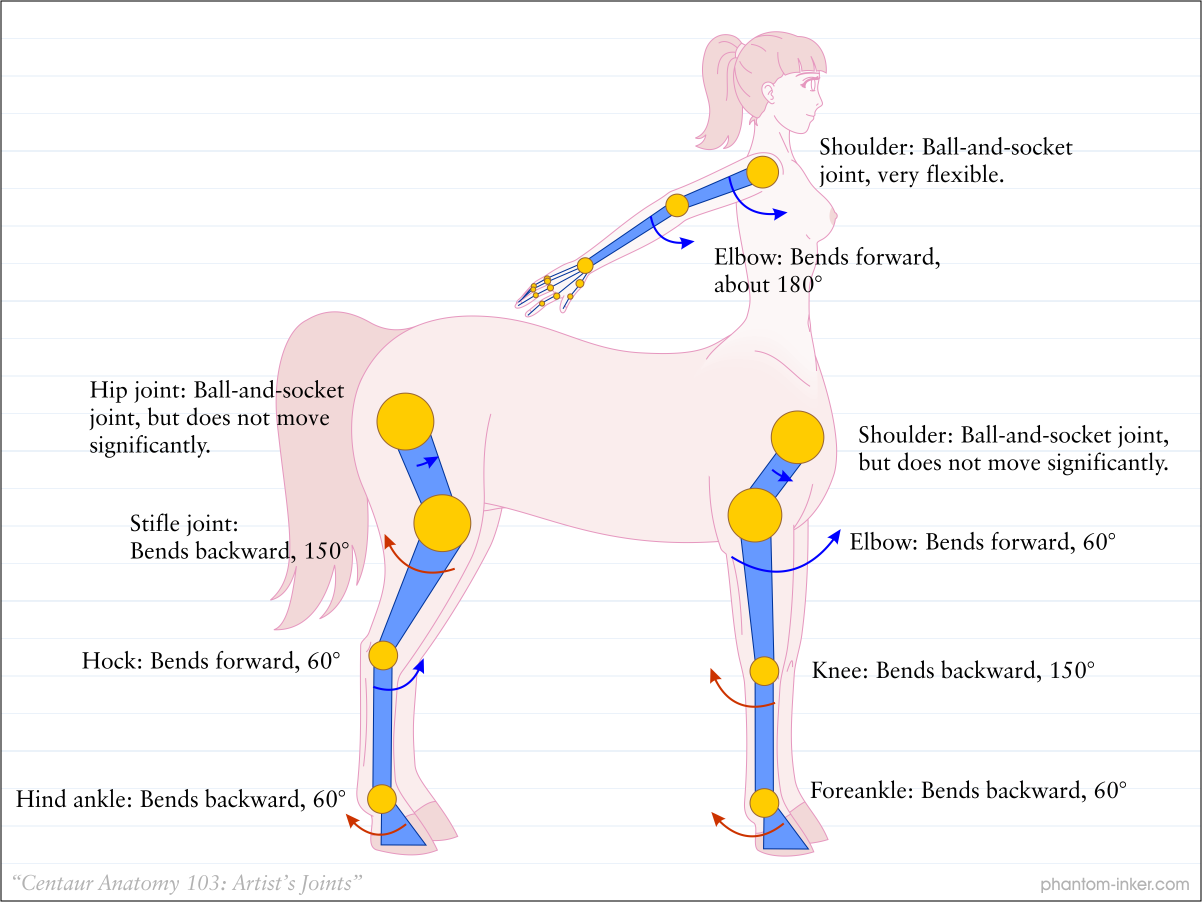 Usual disclaimer: These are my opinions! There is no real physical centaur to compare against, so the best I can do is make an educated guess. If you prefer a design other than this, that's fine, but this is what I'm going to keep drawing. If you disagree, fine, but do so politely, and above all, please don't ask I draw things your way. I know how I think it'd work, and that ain't gonna change.

Drawing a horse is difficult. Drawing a human is difficult. Taking two of the most difficult things in the universe to draw and gluing them together is simply madness. And the result of that madness is that a lot of people fail pretty hard on drawing either one half or the other, most often because they get the horse's joints wrong.

So this is a simple diagram to help get the joints more correct. Next time, we'll look at the bones that make all this work, but for now, let's go simple.

The foreleg has three critical joints in it: The elbow, the knee, and the fetlock (foreankle). The elbow can bend between straight and about 60° forward. The knee is very flexible, and can bend from straight to backward quite a ways. And the fetlock bends from about 30° forward to about 30° backward. There is also a joint at the shoulder, but it tends not to move much except during leaping and galloping, so you can consider it to be relatively stable.

To think about the foreleg correctly, you should compare it to a human arm: The upper two blue parts are equivalent to the upper arm and forearm, and everything below the equine knee is actually a "hand," with the pastern-and-hoof being equivalent to fingers. So if you think about it this way, the equine elbow is just like a human elbow, and it only bends forward, but is pretty flexible; and the knee is like a wrist, but only really bends backward, but can bend backward farther than your wrist can.

The hind leg also has three critical joints in it: The stifle, the hock, and the (hind) ankle. The stifle is very flexible, and bends from straight to quite a ways backward. The hock is less flexible, and bends forward from almost straight to almost horizontal. And the (hind) ankle, just like the fetlock (foreankle), bends from about 30° forward to about 30° backward. There is also a hip joint, but it is fairly stable and does not move much except during leaping and galloping.

To think about the hind leg correctly, you should compare it to a human leg: The upper two blue parts are equivalent to your thigh and calf, respectively, and the pastern-and-hoof are equivalent to your foot and toes. So if you think about it this way, the critical part to remember is how high up the knee actually is, just below the barrel, and how high up the "human ankle" actually is, halfway up the visible part of the leg.

A horse walks on just the very tips of its "fingers" and "toes," and a centaur does the same. Half of what you see of each leg is equivalent to a human "hand" or "foot," and should bend just like hands and feet do; and most of the actual "leg" is shorter and higher up.

Next time, we'll look at the actual bones that make up the arms and legs so you can see how all this fits together.