i only drank one per hand 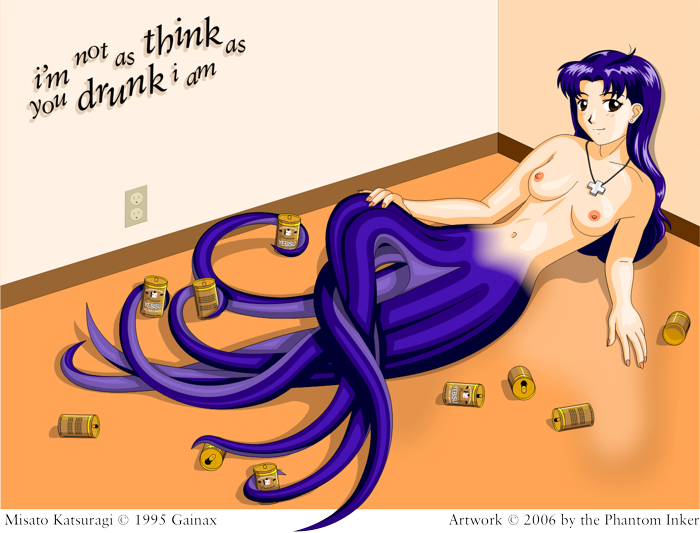 The inimitable Misato Katsuragi from Neon Genesis Evangelion... half turned into an octopus, and on her way to getting very drunk. No, I don't know how this happened to her.

This was a sort-of contest winner, suggested by Jessica Raven, with some additional ideas by Saria. I wanted to draw Misato, because she was the only character from Eva that I actually liked, so the contest was to come up with something half-human to turn Misato into, and it had to be either a centaur, naga, drider, or octo-woman. Jess suggested drawing Misato as a severely drunk octo-woman, with each leg holding a beer; and my judging panel (me + my girlfriend) decided that was the winning idea.

I debated putting her red jacket on her, but decided I didn't feel like drawing a billion wrinkles (iron that jacket once in a while, girl!). So here she is, sans clothing. Heck, she's a drunk monster, so who knows what she'd be wearing by this point?

This was done in a whirlwind pair of drawing sessions, ten hours on one day and two on another: The initial sketch was about 3 hours (and can be found in my Scraps); the flat-colored was about another 3 hours; and the finished shaded version was about another 6 hours.

Anyway, enjoy! (She certainly seems to...)